You are here: Home / Daily Life / Judge Not Lest Ye Too Be Judged

What is with us women?  Why do we so often find ourselves making presumptions about one another?

Did you ever wonder what might happen if, instead of staring at that girl who has the perfect outfit, whose hair is perfectly highlighted, who has flawless skin, AND whose the kids aren’t fighting… what if instead of staring and presuming she and her family were perfect, you walked up to her and introduced yourself?

I have to share a story with you. Sadly, it’s mine and I’m totally ashamed I can claim it as so, but hey, if I’m going to ask you to be transparent, I have to be willing to jump off the cliff first, right?

About 10 years ago there was this new girl at church. (“Girl” is a relative term. We were both old enough to be married with young children, but I sure acted like a girl). This girl was beautiful. She also had an incredible voice, was thin and dressed very well.  All of this was grounds for me to hate her guts.

I was supposed to be the young one who met all that criteria… the church baby who had grown up and was all accomplished. Now SHE was there. Ugh. Jealousy reared its ugly head and it. was. ugly. Pride usually is.

Over the next couple of years I continued to not like her.  Mind you, I didn’t know her at all, just watched her from a distance, making presumptions about what she must be like: Rich, snotty, fake… the list went on and on. I even had the opportunity to meet her once through our parents, who had met a few times and liked each other.  I declined because I wasn’t “ready to meet her yet” because, well, I had decided to not like her.

What on earth?! Who does that? I had let myself create a whole story about this girl I’d never met and decided that we shouldn’t meet because I was jealous of her.  Bleh.  That leaves a gross taste in my mouth.

Then something crazy happened. We were introduced at MOPS. She was hilarious. She was not pretentious or snobby. She burped out loud in public. She could quote any line from any funny movie ever made and do it with the right voice and use it in context. I found myself laughing at her and with her regularly.

I LIKED this girl. I actually wanted to be her friend. WHAT?! So I wrote her a little note, hoping she might like me too.  (Hello 6th grade… “Will you be my friend?  Check “yes” or “no”)

I found out later that during that whole time I was judging her, SHE was judging me. She thought I was (these are her words):

“Beautiful, thin, wore very cute designer jeans; and I really hated that you looked super young even though you were older than me!”

She told me that “what broke the ice of jealousy for me was your sweet note. You called me your friend. I was moved that you cared enough to call me friend when you really didn’t know me well at all. I wanted to know someone–someone beautiful and more “put together” than me-accepted me.”

We were SO stupid.

Neither one of us was willing to step outside of ourselves for years because we were insecure and busy judging… and the whole time, our assumptions about each other were 100% wrong.

Know what else? During that time of arrogant assumptions, she was praying that God would provide her with a friend. I was exceptionally lonely, having just moved back home from a military stint in Texas and was having trouble fitting back into “home”. I felt sad and was yearning for a friend or two that could be “my girls”.

I heard a story once about a guy who was stranded on a desert island in the middle of the sea. He prayed day after day, “God, please get me off this island!”  One day a boat arrived! The man on the island told the captain of the boat, “Oh, thanks for the offer of taking me off the island, but I’m waiting for God to do it.” The captain drove off, leaving the man behind. After more days of praying a plane flew overhead, signaling that they could see the man and were going to rescue him. Once they got to the island, the man shooed the rescue team away, saying, “I’m waiting for God to rescue me.” The rescue team was very confused, but left the man as he requested.

Finally, after being stranded for a very long time, the man died. Upon facing God in heaven, the man said, “Why didn’t you rescue me?” and God said, “I tried. I sent you a boat and a plane and you rejected both of them.”

How often have we desired something SO much and expected to get what we wanted AS we asked for it? Sometimes the very thing we hunger for is right in front of our faces but because we’re so busy living in those expectations that we MISS the answer to our prayers!

“For I know the plans I have for you,” declares the Lord,

“plans to prosper you and not to harm you.

Plans for hope and a future.”

God doesn’t operate within our expectations. He has a plan that is so much better than we could’ve ever thought.

That girl, the skinny, smart, talented one I spent 4 years judging is now one of my closest, most cherished friends on the planet. She is a friend who encourages, challenges, speaks truth to me and LOVES the Lord.

So here’s my challenge to you: you know that lady who seems to have it all together? The one with the nice car? Whose kids behave themselves? That one who always has a smile on her face? That one you look at but don’t talk to?

She’s probably noticed you too.  And she probably has made false assumptions about you just by what she sees on the outside.

She’s not perfect either.

Get to know her. Share yourself with her. Be honest. You never know, you might get a best friend out of the deal. 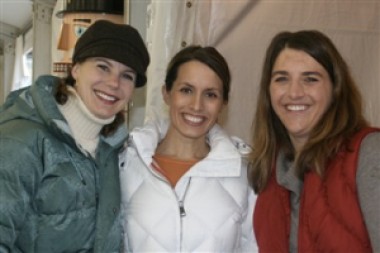 My girls… if it weren’t for the one in the middle, I wouldn’t have met the one on the end. I love these ladies like crazy!

How do we “seek the Lord”? We look to His Word

“Let us hold fast the confession of our hope wit

5 and as the women were terrified and bowed their

Load More...
This error message is only visible to WordPress admins

All images and content Copyright 2018 Transparency Project unless otherwise noted. Please submit requests to republish via the contact form.